Bernt Endresen was born March 7th 1850 on or near the farm Gjærbrønn in Landvik, Grimstad, Norway. His parents was Endre Terjesen and Gunhild Marie Kittelsdatter, they came both from the neighbor parish Øyestad. His father was born on Risholt, Øyestad and his mother on Nævisdal, Øyestad.

Bernt was baptized in Landvik church March 31st 1850. He went through confirmation in the same church April 3rd 1864. The year after, he is a boatbuilder apprentice on Sandkleiva, close to his homeplace. Today, Landvik school is located nearby.

In the winter when he is thirty years old, he is about to get married. His wife is Gunhild Andrea Aslaksdatter from Krogelia in Fjære parish. Fjære parish is also a neighbor parish to Landvik and Øyestad parishes. Gunhild Andrea lives on Lindtveit in Øyestad, and the wedding is set to Øyestad church on Friday January 21st 1881. The wedding has been announced in the church on the three previous Sundays, as the ruling was.

Bernt and Gunhild Andrea moves to her home farm; Krogelia in Fjære. They become the parents of to girls. Johanne Malene born 1883 and Gunhild Marie born 1886.

Gunhild Andrea became ill in the summer of 1890. She gets pnemonia and sadly she passes away, just 43 years old. Her small girls are seven and four years old, when this happens.

Bernt is now a widower for four years. He marries Anne Oline Askildsdatter from Lindtveit in Øyestad April 13th 1894. She was born October 16th 1857. Her parents was Askild Hansen and Karen Olsdatter. Oline had a grown up daughter; Alvine born 1877.

One curiosity is that on cousin of Oline was to become her stepdaughters mother in law.

Bernt also gets pnemonia and he passes away three days before his sixty sixth birthday on Krogelia 1916.

Oline get to live for several years longer than her husband. She passes away 88 years old in 1945.

The map below shows places mentioned on this page.

The aerial photo of Krogelia below opens an external map-service. Click on HISTORISKE in the top left menu, and then click on OYESTAD-1971. Now you can watch historic aerial photos of different years. 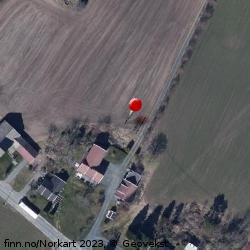