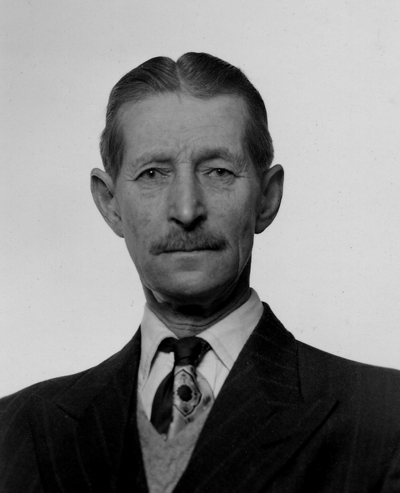 The Man From Øyestad, who has built thousands of boats. And been an elected member of Øyestad Municipality Council, since 1922.

«Agderposten» in pleasant conversation with the man who has done so many things.

I talk too much, «said the cozy Karl Livollen that tomorrow reach the age of 65 years.

Tomorrow at Sunday, the famous Øyestad-man, farmer and boat builder Karl Livollen turn 65. Not a very high age, but since it is Livollen; Agderposten have used the occasion to a small birthday interview.

Livollen grew up on Lindtveit. His father was a farmer and boat builder, and of course the son had to learn the boat building profession and work on the farm from.

When Karl was 19 years old, he left for America.  As like many others on that time, he wanted to leave home to se the world.. Karl must have been homesick too, when he was at home for a visit in 1907, he stayed in Norway.

Livollen tells that he could not thrive in the USA – there were never any calm. Even when just going for a walk, it was like race walking.  It was better here at home.

Besides, he was so lucky to have 4,000 NOK in initial capital when he came home. When the Livollen property was up for sale, he bought it in 1908. And then his then occupation became both farming and boat building.

It is actually a good combination, «said Livollen.

THE DEVELOPMENT OF THE FARM

– How was the situation of the farm operation at the time you bought Livollen?

– It was operated as it had been run for centuries. Significant cheese and butter production. This continued until 1922, but then I realized that there had to be a new arrangement.  I got some of the village to pull together and we joined Arendal Dairy. The milk was brought to Rykene railway station for ten years, but in 1932 we had arranged it so that we could get the lateral line and station up and running again on Lindtveit. And at that time, milk volume increased from 22 000 to over 100 000 kg in 1932.

Before reaching this good result the farm had to undergo a development. The bull  association was founded in 1923. We have had 2 prized bulls all this time and not looked at the money. The number of members is 25 and from Øyestad and Nersten districts.

We may at our own expense add that Karl Livollen has been chairman of this association in 25 years. It is needless to say that he has done an outstanding work all the time.

While we’re talking about milk, cows and farming, we also recorded that the foot-and-mouth disease was confirmed on Lindtveit in 1927. The place became famous – sadly familiar – over all of Norway. It was an awful time. I came home from a meeting in the municipality council, Livollen says. I saw to the cows in the barn. They seemed pretty well.

But my daughter said they were so rare, the cows ate little or nothing.  Yes, there was something suspicious . The cows were given enema, it didn’t help. The animals were killed. The outhouse should have been burned, but it did not happen. In the spring of 1928 I got a new herd line from Lista in Vest-Agder.  It was a good herd, and was number 4 at Arendal Dairy in 30-years.

THE PIONEERING MAN AT LINDTVEIT

Livollen has probably not got the good results without hard labor. We know that he has cultivated not less than 9 acres. Like so many other farmers, he has been an ardent pioneer. The fact that the previous owner of Lindtveit had 4 cows, but that Livollen in 1932 had 10 with a milk production of 5000 kg per cow, tells a bit about the development.

In connection with the pioneering Livollen tells that there was 62 acres of uncultivated soil.  Half of the area were consolidated 100 years ago, and every farmer had his piece. In 1925, the remaining 31 acres  was consolidated and divided to the farms. It was really not a fun year when this process was being done. There were much controversy in the otherwise peaceful village, where they had always been the best neighbors. The great result of the cultivating made the bad memory of the land consolidating to fade away.

PROCESSES IN ALL GENTLENESS

There was some dispute over Bumyra in 1938. A man filed a process and demanded the marsh for him selves. The case went on for 3 years and he lost. There was also a pretty amazing process. It went gentle.  It was not exchanged a bad word. We even agreed on joint catering at the inspection of the at the marsh. We paid the cost of the dinner, and the opposition paid  the cost of cakes and coffee.

THE MAN WHO HAS BUILT THOUSANDS OF BOATS

Now we have talked to the farmer and dare we use such a word – «farmer’s spokesman» Karl Livollen. We must also exchange a few words with the boat builder. His yard  is actually one of the largest in the villages around. It was built for ordinary vessels, and already in 1931 Livollen had to make enlargement. 5-6 men has worked with him.

– Are you still busy building boats, we ask the boat builder?

– Yes, there is still something to do in the industry, he says. I think I can say it’s been like thousands of boats made here. During the war it could go out one boat per day. It was mostly small light rowing boats.

Now in the resent time I have built from the 6 foot dinghies to the 45 foot motor racers. In 1945 I got the order of a 45 foot boat. Yard was too small so I had to lift the roof 1.25 meters. This summer, I delivered a 30 foot racing boat to a ship owner in Oslo. The owner is very happy. It is difficult to get the materials now. Must go to Oslo to provide it.

– How is the combination of farm and yard?

– Fine. If times change, the farm can be like a safety net if boat building reclines.

There was good market for boats during the war. Now there is something looser, but still has a lot of work. It is strange that, when there is a lot of money with people they like to have boats.

When we sit in front of Karl Livollen’s erect figure, hear the man speak in a calm voice, you see that smart glint in his eyes, then we understand well how he has managed to achieve the master been a member of Øyestad municipality council for 25 years, we also think that during this long time must have been some unpleasant duties. That’s true, he has in fact been the chairman of the terrible “bad working committee” as he put it. Some workers drank up the money and I was required by the municipality council to distribute food stamps instead. This lasted 6 months, but when the workers came and complained that they did not care for their 4  days. It ended with me paying out the money at my own risk. The workers showed me confidence, and it went fine. The municipality council agreed in my dealings. – Otherwise, there were many harsh days in this period of unemployment.

– Yes, ever since I was a kid. – But I discovered that my worst fault is that I talk too much. – At least according to newspaper reports. I have promised many times to slow down a bit, but it just doesn’t happen.

– The debates are quieter now, than before?

Yes, and the last 8 years, there has been a successful collaboration in Øyestad. The sharp sting is gone. One can get to say the same thing now as before, but more factual.  Mayor Christensen is one of the best we’ve had as mayor by the way. One of the things that I think has taken away the sharp tone is the  prayers before meetings. It is well spent minutes.

That was a bit of the politician, and we ask the same gentle man of what he believes about the always current issues: youth displaced from the countryside. Livollen respond that it is a big mistake that so many people do not pay their children for work at home. When I have been able to pay my kids it’s because I’ve had the yard next door. Farming should be such that farmers can afford to give their children daily wages. Farming must get the same live able conditions that industry. Then enough young people will stay on the country side, as I know .